The Start of In Car Audio 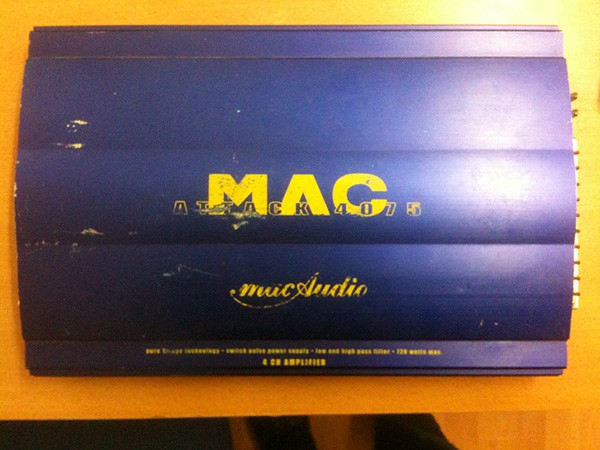 The Start of In Car Audio

My plan for the Nova is to have a pretty loud stereo; Lets face it, I’ll need one if I ever want to hear it over the engine noise 😀 At the moment I’m on a budget, so am starting my build with not necesarily the best or newest equipment, but stuff that will do the job until I can afford something better.

My current head unit is a Sony explode CD/MP3 head unit that I’ve had for a few years now. Its a good unit, and it has the advantage of having 3 sets of RCA line-outs (front, rear, & sub). In the future I may replace this with a similar or better spec unit which has more of a 70’s styling, the Sony looks quite modern, or a DVD head unit with a retracting screen.

I have just got a bargain on eBay of a Mac Audio, Mac Attac 4075, which though old is still a decent amp, and at 720 watt maximum should have plenty of grunt for my front and rear speakers. But if not, I can just use it to power either the front or rear.

I am going to give the amp a face-lift to match the rest of the car. The blue goes quite well, but the yellow is going. My plan is to completely respray the amp purple, except for the vents on the side, then put a fresh set of graphics on in white. On the right is what I want the end result to be.

The graphics will all be white or faded white. I’ll be using Ford Purple Velvet metallic for the colour as Halfords don’t seem to stock Dodge Plum Crazy for some strange reason?